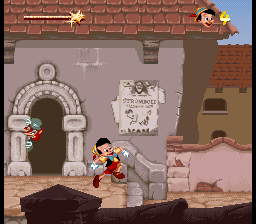 Don't look now, because her Hideousness is back and she's meaner and uglier than ever. This time Rita Repulsa is out to pulverize the Power Rangers once and for all and she's brought all of her nasty friends along to do the dirty work. But, Jason, Trinl, Billy, Kimberly, and Zack are at their morphing best with the awesome power of the Super NES machine on their side. Incredible graphics, amazing sound, and unbeatable action make this battle of good and evil an instant SNES classic. The game features seven challenging levels of play ending with breathtaking, all-out battles against Rita's most fearsome henchmen including Bones, Eye Guy, and many more! Only the power of the Super NES can put all of the characters and excitement of the phenomenal hit TV series right at your fingertips. So what are you waiting for? Morph into action now with the Mighty Morphin Power Rangers�.

Mighty Morphin Power Rangers Review by: Georg-Pryme - 9.5/10
Still a Fun game.
Being a long time fan of both the Power Rangers Franchise and gaming in
general I tend to take a game on the franchise quite seriously. I
remember playing this game when I was a child and finding it to be one
of the best games ever. (Childhood innocence and lack of too critical
thought patterns.) But coming back to this game so many years later I'm
happy to say it is still a fun and challenging, if a simple, game. The
controls are easy to grasp relying on mainly three keys, one for
attacking, one for jumping and one more for a special "Bomb" move that
each Ranger can have on hand to use when the moment calls and you feel
that your character is being overwhelmed. The combat is fun as most side
scrolling fighter type games are, you simply run to the right for the
first level to let you get acquainted with the game play, the lack of a
tutorial is (in my opinion) a welcome remembrance from the past and .
Considering the game is not hard to grasp it is not needed anyhow. From
the second level onward platforming elements come into play, such as
jumping up and even hanging onto certain surfaces to elevate yourself
through the level. Although it's nothing compared to games such a Mario
or others in that vein of gaming the hazards on the platforming segments
are challenging to the point that at times I myself got mad. But it's
not so blisteringly hard that the game is unplayable or not fun any
longer. The game is quite fun but it does have it's drawbacks.

The
main one being the uninteresting color swapped enemies. (The Putty
Patrol) It's the same general enemy just color swapped. Though in later
levels some putty's have Shields or Maces, though the mace ones have
longer reach and the Shield ones take more hits to kill it's the same
general "Mash attack button,move mash again until enemy is dead"
formula. On the upside each few levels you get a nice little one on one
Zord vs. Monster Battle that is a joy to play. I gave the difficulty of
this game an 8 because while it's simple you can still be overrun by a
handful of putties and have to jump around to get them all on one side
which is good. Being too simple would make this game no fun to play. I
do have one small gripe on the combat, the hit detection. At times I
would be playing and I'd be close enough but the hit would not register
properly and I'd take a hit as punishment. It's not a big issue and it's
not often but it will incite a bit of frustration when it does happen.
On the upside though each Ranger had his or her own Fighting Style in
how the characters were animated and I found that a nice little touch
instead of just a general punch, punch, kick type of deal.

Graphically
speaking this game was at a good point in the SNES (Super Nintendo)
lifespan. It's not muddy or ugly like some games at that time were known
to be. (I'll not name names but they know who they were) And the models
used...while a bit Racist (when it comes to Zack the Black Ranger) or
to Jason and Billy (Who just didn't really look right at all, Jason more
so then Billy.) So as the graphics were nice the modeling was a
bit...bad you know who the person is it's just a shame the person didn't
look like the actual character sadly.

On the musical point of
the game it's a bit bland with some metal music track playing in the
background but the iconic Mighty Morphin Power Rangers theme when your
character morphs at the set points in the level always brings a smile to
my face. The sounds were repetitive but that's understandable
considering you're fighting the same enemies with the same moves and
(when in Ranger form) weapons, so I'm not being too critical on that.
The game isn't all that long about 8 or 9 levels I think but they are
all fun and diverse enough and you get a boss battle at the end of each
one with enemies from the show. With the different levels and bosses and
the Zord Battles to mix it up a bit  this game is still very much worth
a play through.

In closing overall I gave this game an 9.5 out
of 10 for being fun,re-playable,nice to look at and play, and a joy for
any fan of the Power Rangers and side scrolling fighting style of games.
It's not the best but it holds up well enough to still be fun.
Graphics 8   Sound 7   Addictive 7   Depth 7   Story 7   Difficulty 8

This is a one-on-one fighting game for one or two players. Single players pick a Ranger (Red, Pink, Blue, Yellow, Black, or the unlockable Green) and take him or her through a series of battles against Rita's monsters. After one normal battle, the monster grows very large, and then it is time to take out the MegaZord.